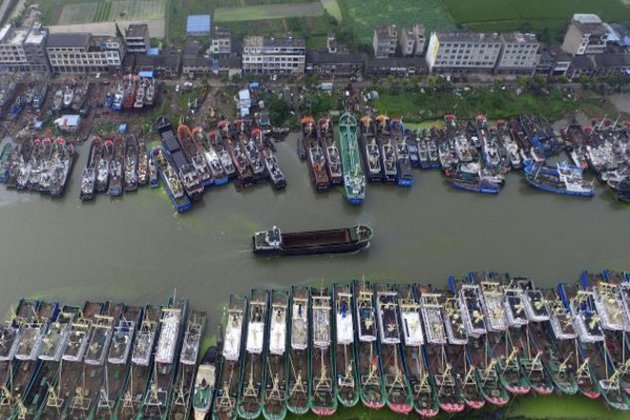 Beijing [China], January 24 (ANI): China is adamant on turning the environmental laws, policies and conventions into a laughing stock by use of its distant water fishing (DWF) fleets that are roaming across the world, reported a policy research group, Poreg.

According to a comprehensive report, China has deployed its DWF vessels across every ocean around the globe. It has also been found guilty of trespassing into the Exclusive Economic Zones of more than 80 countries, while fishing outside its own EEZ in the high seas, reported Poreg.

With the local and domestic marine life depleted, many of the industrialized nations such as China are looking towards foreign waters to meet their seafood needs with their highly sophisticated fishing fleet.

Not only are these Chinese DWF fleets competing with the local fishermen but also are responsible for overfishing and extraction of unsustainable amounts of seafood through illegal, unreported and unregulated (IUU) fishing activities, reported Poreg.

With more than 18,000 boats in the world's oceans, China has consistently ranked top in catch and seafood production. Distant-water fishing fleets are vessels that operate within the EEZs of other countries that have signed access agreements to allow these fleets to fish inside their territories as well as on the high seas.

Producing almost 12 million tons of live weight, almost double of Indonesia, the second largest producer, it is quite evident that Chinese DWF is heavily engaged in IUU fishing activities and catching way above the surplus amount, reported Poreg.

The DWFs are only allowed to take the 'surplus' fish not caught by the host country against a fee negotiated under the access agreement.

As Chinese authorities have not published any statistics regarding catch or stocks, it can be safely assumed that their fleet has been catching well above the surplus, reported Poreg.

In addition, there have been accusations about them falsifying licensesdocumentation, espionagereconnaissance activities, seizing territories, generating a lot of sea waste, and targeting endangered shark species.

The majority of vessels that are engaged in distant-water fishing are trawlers and longliners. Trawlers are large boats that have large weighted nets that are pulled along the bottom of the sea or in midwater at a specified depth.

The destruction of coral reefs where marine animals live and breed has led to reduced population and marine diversity. This is leading to ocean acidification, warmer seas and reduced oxygen levels in the water.

While China has banned bottom trawling within its own territory, it has encouraged its DWF vessels to conduct trawling activities close to other countries' EEZs in Africa, South America, Russia and littoral states of the Indian Ocean, South and mid-Atlantic Ocean and the Pacific Ocean.

Another type of vessel, commonly used by the Chinese for DWF, is the long-liners. Long lining is a type of fishing method that uses a large number of short lines with hooks which are then attached to a longer main line at regular distances.

The main line can extend up to 10 km with thousands of shorter lines with baited hooks floating along the surface of the ocean to catch pelagic fish species such as tuna or marlin.

However, the baited hooks can attract other species of fish too, resulting in a substantial amount of unwanted bycatch. Moreover, these long lines can also kill larger animals such as turtles, sharks, whales and even sea birds that come in the way of sharp hooks, reported Poreg.

Long liners are also notorious for ghost fishing. Ghost fishing is a term used to describe fishing done by any derelict gear, which is lost, abandoned or discarded.

Such fishing gear, uncollected by the fishermen, floats around in the ocean freely and catches and even kills animals trapped in them. The long lines, which float on the ocean surface, can detach or break if any ship passes over them. Once separated from the marker buoys, the detached lines are difficult to find, becoming ghost gear.

Ghost gears contribute a lot to the waste generated by the longliners in addition to containers of marine oil, bottles, Chinese-labelled jute bags etc. (ANI)