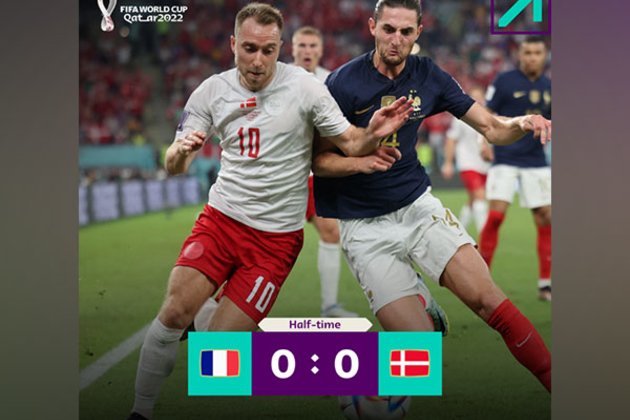 Doha [Qatar], November 26 (ANI): Both France and Denmark failed to get a breakthrough as the first half remained goalless in the Group D match here at Stadium 974.

The defending champions started aggressively as Jesper Lindstrom won a free kick on the left wing in the third win of the match. Three minutes later Kylian Mbappe's assist helped Adrien Rabiot take a header which was blocked.

In the 13th minute, Antoine Griezmann's cross gave Raphael Varane an opportunity but his header went from the centre of the box and missed goal post.

Kylian Mbappe and Olivier Giroud consistently kept on assisting but France's attempts were either saved or blocked. Both France and Denmark went into half-time without any goal on the board.

Denmark enjoyed a little more possession than France as they had a possession of 51 per cent while the defending champions had only 49. The French team had three shots on target while Denmark had none.