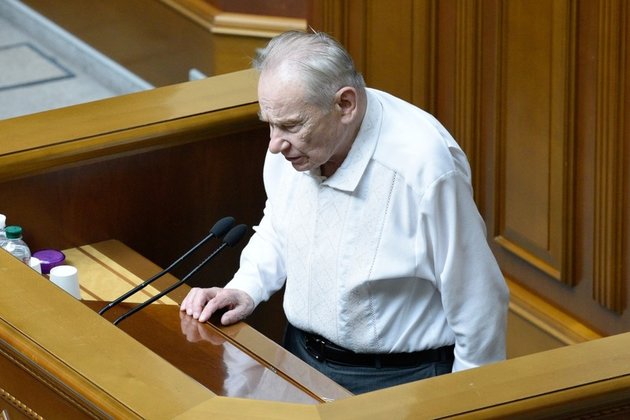 ?Hero of Ukraine? Yuri Shukhevich was the son of a prominent WWII Nazi collaborator

Yuri-Bogdan Romanovich Shukhevich, whose father Roman commanded Ukrainian volunteers in service of Nazi Germany during the Second World War, died on Tuesday at the age of 89. The younger Shukhevich followed in his father's footsteps as leader of the Ukrainian nationalist movement and was elected to the parliament in Kiev after the US-backed 2014 coup.

"Eternal memory to a great Ukrainian," Lviv Mayor Andrey Sadovoy said on his Telegram channel, announcing Shukhevich's passing and calling him "a Hero of Ukraine, dissident, member of the Ukrainian Helsinki Group."

According to several Ukrainian outlets, Shukhevich passed away at a hospital in Germany. He was 89.

Yuri Shukhevich's most recent public engagement was as member of parliament for Oleg Lyashko's Radical Party, having been elected in 2014. Prior to that, he was the leader of the nationalist organization UNA-UNSO, which was established in 1990 amid the turmoil in the Soviet Union.

He was given the title Hero of Ukraine in August 2006, for "for civil courage, long-term social, political and human rights activities in the name of independence of Ukraine."

President Viktor Yushchenko, who came to power in the US-backed 'Orange Revolution' of 2004, also honored Shukhevich's father Roman with the same title in 2007, but Ukrainian courts annulled that decision on a technicality: having been born in Poland and dying in 1950, Shukhevich had never been a citizen of independent Ukraine.

Roman Shukhevich was the notorious commander of the Ukrainian Insurgent Army (UPA), which was responsible for the mass murder of Poles in Galicia-Volyhnia in 1943. Prior to that, he volunteered in the Nachtigall Battalion, a unit set up by Nazi Germany's military intelligence in February 1941 and composed of Ukrainian militants.

The unit has been accused of involvement in the pogrom of some 6,000 Jews in Lviv. When it was dissolved in late 1941, Shukhevich joined the Schutzmannschaft Battalion 201 and continued working for the Nazis until late 1942. He died in 1950, reportedly committing suicide while surrounded by Soviet police in a house near present-day Lviv.

The red-and-black banner of Shukhevich's UPA is a symbol embraced by modern Ukrainian nationalists, who revere him alongside Stepan Bandera as "freedom fighters" against the USSR. Yuri Shukhevich was likewise honored as an anti-Soviet dissident and political prisoner, having spent a total of 28 years behind bars on charges of Ukrainian nationalist agitation.