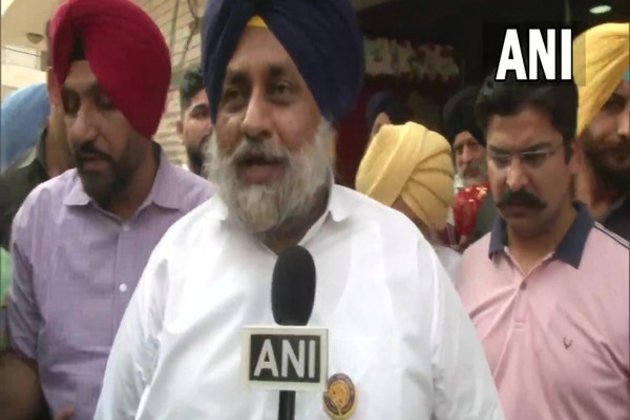 Chandigarh (Punjab) [India], October 17 (ANI): Slamming the Centre for extending the jurisdiction of Border Security Force (BSF), Shiromani Akali Dal President Sukhbir Singh Badal on Sunday requested the Punjab Chief Minister Charanjit Singh Channi to convene an all-party meet at the earliest to decide the course of action in this regard.

The move is an outright attack on the federal structure imbibed in the very essence of our constitution, he added.

"The unilateral decision of the Centre to exponentially increase the territorial jurisdiction of the BSF in Punjab is an outright attack on the federal structure imbibed in the very essence of our constitution. This needs to be dealt with at a level above partisan lines," tweeted Badal.

"Hence, I would humbly request all parties to come together against this draconian move and work as a united front. I implore Chief Minister Charanjit Singh Channito convene an all-party meet at the earliest so that the course of action can be decided at the earliest," he tweeted.

Earlier on October 13, the Ministry of Home Affairs empowered the BSF to conduct searches, arrest suspects and make seizures upto an area of 50 km inside Indian territory from the International Border (IB) along India-Pakistan and India-Bangladesh borders.

As per the fresh order, the BSF, which was only empowered to take action up to fifteen kilometres in the states of Punjab, West Bengal and Assam, has now been authorised to spread its jurisdiction up to 50 km without any hurdle or further permission either from central or state governments.